An Open Letter To IT Recruiters

So maybe this is not a letter per se, but the title fits as I hope many IT Recruiters read this. I have been around the information technology/information security industry for a while, actually almost a decade. Before that, I spend almost a decade navigating submarines in the U.S. Navy. I have spoken with HR and recruiters for more positions than the number that I have accepted. I would venture to say that it is at least a 1 to 10 ratio of positions offered and accepted versus those discussed or for which I interviewed.

Types of IT Recruiters

When it comes to IT Recruiters, I have worked with some of the best and some that I would consider the worst. To set the tone, I want to point out the employment and pay models for most recruiters:

Note: These are broad generalizations and will not completely describe all recruiters. Some companies will have different pay models and the quality of the interaction may be uncharacteristic (for better or worse) of what I summarize.

I would like to share scenarios of my experience with each of the three types that I outlined.

As you may assume, your mileage may vary and your experiences are likely different (for better, worse, or otherwise).

1. Permanent Internal Employee: This has been my best experience. In some positions, it was HR or the COO of the company that handled this. For others, it was the dedicated recruiter that was on a different team in the HR Directorate than actual HR.

In these scenarios, they communicated often and concisely. I could tell that they were passionate about making the experience good for potential candidates. They were knowledgeable about internal processes and able to answer most questions and did not hesitate to find someone who could if they could not.

Through the process, I went through 5 of the 6 interviews in a 10 day period. I felt like I was being fast-tracked to be hired. I never got the 6th interview. A friend that is an internal employee found out that because the contracted recruiter never followed up with the hiring manager, they had to close the job requisition. He never called me back or returned my calls.

Fast forward a few months, I apply for an IR consultant position. They contact me for an interview. I explained my past experience with the company, to which the recruiter apologizes. I ask him to commit that the experience will be more open and better for all. He agrees reluctantly. After my initial screening, I never hear back. My friend that works there inquires and does not get a response either.

During the interview, they start asking advanced questions about networking. I had no background in networking. I admit that I do not know then offer an educated guess and insight into my thought process. The interviewer made a comment about a CCNP should know this as it was CCENT/CCNA knowledge. I quickly reply that I do not have a CCENT, much less a CCNA or CCNP. They say that my resume has a CCNP and certification number on it. I explain that it is false and tell them about the coaching.

I give the interviewers my email address and ask them to send me what was submitted and that I would forward the email containing what I sent to the headhunter. Night and day may be an understatement of the differences between the two. I explained that I was unemployed and just trying to get a position, that I typically did not work with such firms and expressed my embarrassment. I offered to stop the interview to stop wasting their time or mine. They were appreciative and said that they were not holding any prejudice against me, only the placement firm.

Most of us have probably been randomly messaged on LinkedIn or emailed for a position outside our experience or interests. I used to get solicited for Java developer positions, yet I do not even mention Java or JavaScript in my resume or social media. I try to vet connections before I add them. If they seem to be from a headhunter, I typically do not accept. I am currently in a permanent position and uninterested in giving that up for a 37 minutes contract to hire position on a help desk. (Note: The 37 minutes is exaggerated satire and I have nothing against help desk positions, but I am not interested in those positions nor does my resume reflect that I would be a good fit).

From my analysis, it seems that many recruiters (mostly headhunters) are mostly interested in what I call “spray and pray” meaning that they want to send the position to as many people as possible without any concern as to whether they are good fits. This is certainly annoying. Below is an example of a non-recruiting message that I received ahead of RSA Conference from a salesperson. The amount of false and incorrect information is astounding. (I do not have an assistant). 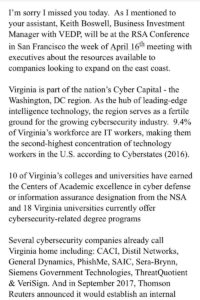 Emails from IT Recruiters

Have you ever wondered by you get email blasts for irrelevant jobs via email? I have been researching this and I think I have an answer. From what I can tell and from what recruiters who have sent me repetitive emails and I confronted have told me, it is because I uploaded my resume to a career site with my contact information on it. Career Builder, Monster, Indeed, etc. allow recruiters to pull job seekers’ contact information. After all, this relies on this model to work for the most part.

How can a recruiter place anyone in a position if they cannot contact them? I wish there were more scrutiny in allowing such information to be pulled. It would be more ideal if the job boards required the recruiters to be more specific as opposed to pulling all information down. Since I go by my middle name, I can vet whether recruiters actually read my resume, as they will not use my middle name if they do not. As a professional, my advice to recruiters in this sense, as well as social media, is to take the time to refine the candidates to those with specific keywords to the position they are trying to fill as opposed to the spray and pray.

If you have ever seen me give a social engineering talk or heard the audio, you will know that I openly admit that sales and social engineering are basically one and the same. They both use influence to attempt to get the person to do what they want. To take this a step further, recruiters are also salespeople. They are selling you to the company and the company to you. Like social engineers and salespeople, they need to build rapport with those they work with to attempt to influence the outcome in their favor. Below is an email that I received that displays manipulation (malicious influence), poor ethics, and downright dirty tactics.

The major red flag for me was that the “referral” from “another cybersecurity professional that they are engaged in a job search with referred me but wanted to remain private.” Who would do that? There is likely a referral bonus. Who would turn that down? It just does not make sense.

In conclusion, I did not expect this to be a 2,000+ word post. I have many friends that are in the job market right now and they have been venting to me. To a degree, this brought back my experiences and in talking to Ben, he recommended me to write this, so here we are. I do not intend on this being a recruiter bashing post, but rather an open discussion between those seeking and those hiring. Hopefully, this post helps both sides of the aisle to learn how to communicate more effectively with the other and to understand the motivations of each.

By the way, check out my new OSINT articles on Forbes: